FEATURED ATTRACTION: Tate Modern screened Kevin Jerome Everson’s 2013 film THE ISLAND OF ST. MATTHEWS on FRI 08 SEP as a prelude to their forthcoming weekender, SO I CAN GET THEM TOLD (29 SEP to 01 OCT 2017).

As a prelude to Tate Modern’s Kevin Jerome Everson weekender later in the month, we were excited to dip our toes into Everson’s techniques and preoccupations with a screening of his 2013 film, THE ISLAND OF ST. MATTHEWS, and two other shorts.

Intriguingly screened as part of the Open City Documentary Festival, Everson’s habit of casting and staging scenes in his films makes this prolific artist an unreliable documentarist. In a brief intro, festival programmer Oliver Wright described this as Everson’s attempt to “subvert documentary form and manipulate reality to question a wider truth”. It’s hard to know how effective this is from a small sample of work, but the moving images are beautiful.

THE ISLAND OF ST. MATTHEWS is a study of people in the home town of Everson’s parents, Columbus, Mississippi. It’s about memory as Eversons’ subjects recall a momentous flood decades after the fact and movement, be it the precise motions of work or scenes of water rippling in the sunset, filling a loch or speeding beneath a waterskier.

Prompted by Everson, Columbus residents recall all that was lost in a great flood of 1973, although they each have to remember when exactly the waters came. Calm and pragmatic – “It was difficult, but we survived and that’s about it” – this is organic memory about what happened and what was lost. They are seemingly real tales, but, Everson – a sculptor as well as filmmaker – made the bell that tolls repeatedly through the film, a jerry-rigged prop replacing an original. In addition to the bell, we also learn by the end credits of a costume designer and waterskiing instructor. We are uncertain about what we are watching. Fact, fiction or a more real version of life that includes and acknowledges the artist in the telling of these stories?

Throughout, seemingly conventional documentary scenes are intercut with beautiful, languid long takes. A loch fills and balances pressure, the sound of moving water accompanied by the noises of submerged machinery like whale song. A water skier travels along a river, eventually wiping out. These sequences unfold like longform haikus, drawing you into each frame and encouraging you to hunt for significance.

Everson’s fascination with the calm dignity of work repeats throughout with young men being baptised in yet more water, a technician operating massive damn machinery and the founding matron of a beauty school showcasing routines of gowning, shampooing and conditioning a client’s hair. These scenes seem stilted, possibly staged recreations for the camera rather than spontaneous observations of life in motion.

The most piercing sequence is the emotional testimony of an ageing man with a prosthetic limb and Obama cap. He shakes with Parkinson’s and reads scripture over final sequences of the film. Whether this is fact, fiction or something bigger, the profound sense of people and place by the end credits is real and rooted.

For the next film, we are plunged into silence, with nothing but a single magazine of 16mm stock to dictate the duration of Everson’s short film. OLD CAT is a one shot journey up river in the company of two men that we can see whilst a third, presumably Everson, holds and pans the camera. One man sits forward, the other is reclined, leg bandaged, cradling crutches (more costume). Why are we here? What is their/our relationship? Where are we going? There is no other drama than the journey. 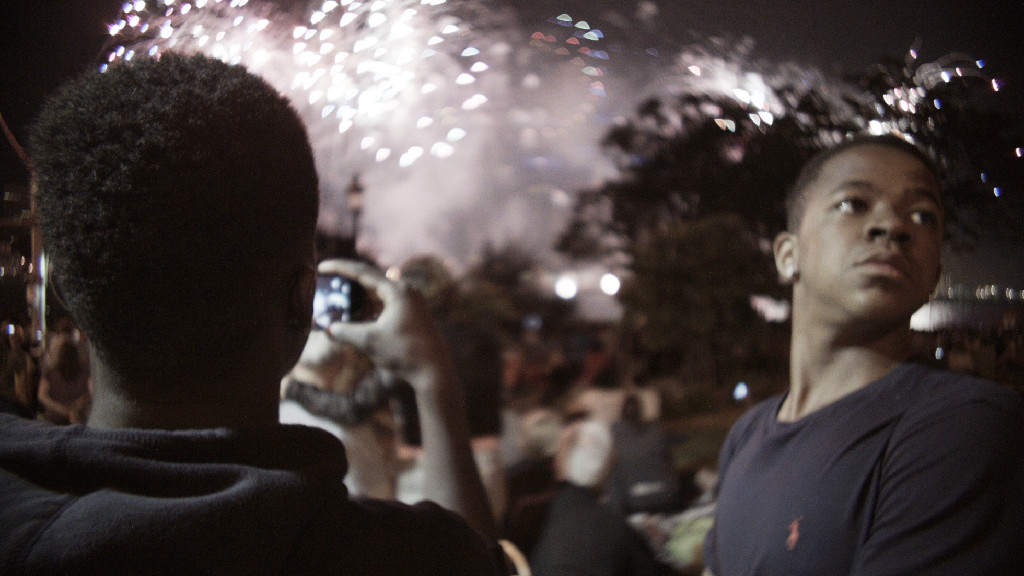 For us, the best came last. And it was brief. Tightly framed and precise, Everson’s camera lingers behind two teenagers watching a Fourth of July firework display. They create a film within a film, capturing the fireworks above our heads on a cell phone. One camera set up shifts to another as the display builds to its concussive conclusion. Boom. Applause. The End. As mainstream cinema struggles with its portrayal of black youth, GRAND FINALE is a beautiful study of black lives at rest.